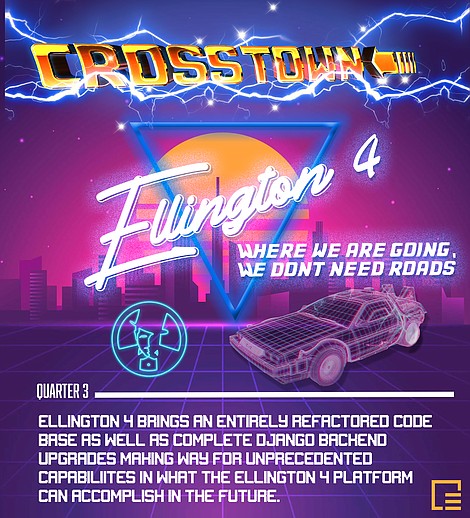 That's right folks, today we release Ellington 4, and what an unprecedented update this is. The full list of new additions, changes, and upgrades is below, but I would like to point out what Ellington 4 means as a whole.

We always push to stay on the latest and greatest versions of Django and Postgres but have always been at the back of the pack only upgrading to a new LTS release when the current one reaches the end of life. Well not anymore! We have bumped Ellington up to the beginning of the latest Django and Postgres LTS shortly after they were made available and will reside on these until a new LTS release is dropped. At which point, we will then upgrade at the beginning of the LTS cycle instead of the end.

What does this mean to you as a user? It means that Ellington will be receiving faster updates to modern technologies than ever before. The updates to our frameworks will be made available upon release of the framework (or shortly after) giving our developer partners access to the latest tools and features faster. From a non-developer client standpoint, this means that you'll be receiving lots of features faster to your CMS at no extra charge.

Ellington 4, coupled with the new Django and PostGres, gives us the foundations to build Ellington in an even more powerful system than it currently is. We will have new features rolling out weekly that give you access to areas and tools that you never have before such as adding custom fields to models without the need for developers or accessing your users via the API to integrate seamlessly with third-party systems.

This is just the tip of the iceberg of what is to come. See the full Changelog below to see what has been updated, new and removed. As far as upgrading to Ellington 4, your project manager will reach out to schedule a time to upgrade. The admin UI doesn't change and requires no extra training. The upgrade process will be fast and won't require any site downtime.

The date picker in Ellington 4 has been swapped for a newer lighter weight date picker to allow rendering and selection to be faster.

Inside the image manager, we have added a new "crop" tool that allows you to upload images of any size/shape but manually crop them to whatever sizes and layouts you need for them to show up properly on your pages.

We have changed the sorting fucntions in Ellington to that run the columns on lists like stories, images, etc. the new sorting library is faster and allows for faster rendering of the page.

[NEW] Image cropping at photo detail (while editing an photo)

Inside the image manager, we have added a new "crop" tool that allows you to upload images of any size/shape but manually crop them to whatever sizes and layouts you need for them to show up properly on your pages.

[Performance] Upgraded performance from the main queryset on section fronts.